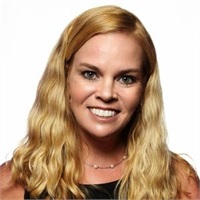 Angela is the Branch Managing Associate, often referred to as the OSJ. A graduate of Bishop Conwell High School, she received her Economics and Finance degree from Temple. She began her career in the securities business as a registered representative in 1993.

While Angela is responsible for the supervision and education of our branch representatives and advisors, she serves a growing clientele. Angela has been the firm's licensed Principal since succeeding her father in that position in 2004. Angela is considered a leading investment advisor based on her service to clients and her achievements within the industry as demonstrated by awards she has received from broker dealers, insurance companies and mutual funds.

Angela focuses on Retirement Income Distribution, Retirement Plans and counseling those who are soon to be retired employees. Angela believes in the final analysis, that her best business practice is to "manage the process" for her clients. That includes the organization, strategies, implementation and continual monitoring of her clients' financial plan. She studied fiduciary responsibilities through the Center for Fiduciary Studies.

Angela has two daughters and resides in Bensalem. She is a member of the Union League of Philadelphia and has been involved with St. Francis/ St. Joseph's home for children and supports local charities. She is currently going through a long process to become a volunteer at the Covenant House in Philly, working with teenagers in need.